With rehearsals well and truly underway, it's about time we introduced you to the band! We're still not 100% on a name - current favourite is Iris (the Greek goddess of communication) but if you have any better ideas then This email address is being protected from spambots. You need JavaScript enabled to view it.!

Cat was inspired to put together the Makaton Folk project after being involved in 'Welcome Songs', a performance for the lighting of the Paralympic Flame in 2012, where she signed four folk songs alongside Eliza Carthy and her band, I Fagiolini, and a full community choir involving people with a range of disabilities. Having been brought up with folk music and dance, Cat has spent the last five years working on musical accessibility, and this project sees her uniting her two musical passions.

Cat leads two community choirs, performs with ceilidh band Triptych, and is currently working with The Makaton Charity to develop a 'Train the Trainer' course for Makaton tutors who want to work with song. In her spare time(!) she runs our community folk festival Folk Weekend: Oxford. 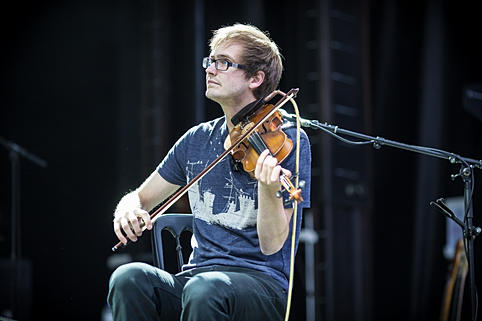 Award-winning fiddle player Henry Webster is among the latest generation of folk musicians bringing a fresh perspective to the tradition. As well as performing solo, Henry is the fiddle player with The Will Pound Band, the genre-bending electronic-folk trio Tandem, and duo Henry Webster & Dave Malkin. Henry is also a session fiddle player, recording fiddle and violin at studios all over London for pop, folk and classical artists, composers and arrangers.

Ollie King is a melodeon player and singer whose music is steeped in the customs and traditions of England. Based in Sheffield, he is starting to make a name for himself as one of the most exciting and interesting up-and-coming melodeon players in the country, and has already developed into a mature, well-rounded musician with a unique style and approach to traditional music.

Also a producer and sound engineer with a successful record label, Pete's driving guitar rhythms underpin the band's arrangements. He plays regularly with a number of bands including The Ship Band, and Triptych, but is usually seen at Folk Weekend in the dark space behind the sound desk!